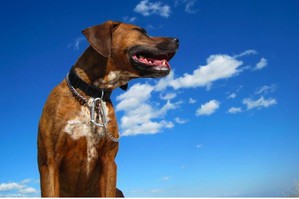 I am blessed to have a lot of great friends all over the country. And in nearly 15 years of touring with my music, I have met wonderful people in every place I have gone. Throughout North America, Ireland, and the Caribbean, I have met good and kind individuals. I have met folks that could only be called Salt of the Earth or Mench. You know who I’m talking about.

And for some those friends are not just human beings. For some – those faithful companions are perhaps four legged and furry!

Such is the case with my dear friend Joe Armstrong. It might be that his truest companion in the last decade has been his dog Sally. She is special too! She is emotionally aware in ways that elude a lot of people I know. And she is full of life, energy, and enthusiasm. She is really remarkable, and in my estimation, a sentient creature.

Joe and Sally met in Alabama. He was visiting family, and she showed up as a stray. He was going to clean her up and get her adopted out. But they connected. And 9 years later, they are still true companions, living in L.A.. Through thick and thin, Sally has been with Joe. Through various career shifts and times of economic hardship, Sally just rolls with it. Through different relationships and phases of life, Sally has been there. On camping trips and hikes, on road trips and adventures, Sally has been the intrepid co-conspirator. In truth, Sally has been Joe’s most constant companion. She has been his daily reminder that he is not alone, and that he is in fact connected to a bigger web of life, and answerable for his own actions and choices.  She is a GREAT dog and an even better friend.

So when Joe found out that Sally had cancer, he was devastated. He was depressed and sad and angry; he was all of the things any one of us would be if we found out that one of our best friends was dying. And then… He discovered that there was in fact a whole branch of medicine devoted to oncology for pets and animals. And he discovered that Sally’s form of cancer was treatable, particularly in dogs. They seem to be somehow more able to bounce back from certain forms of cancer than humans. But Joe knew he could not afford treatments. And Joe also knew that he owed Sally more then he could ever repay. But what’s money to a dog? If he were to honor the goodness she has brought into his life – he needed to give her every chance to live.

Sally is a Plott Hound, and they can live to be 15 or 16 years old if they are properly nourished exercised. And Joe has taken really good care of Sally. She is a vivacious and healthy dog - except for having cancer. So Joe decided he was going to give Sally every possible chance. He was going to incur substantial debt if needs be, to give back to her some measure of what she had given him: hope, joy, faithfulness, companionship, nourishment, and love!

So, Sally is undergoing cancer treatment, and Joe is racking up bills. Sally is responding well to treatments, and Joe is very happy about that. But it’s not cheap. Veterinary Oncology is WAY cheaper than it is for humans… but it’s still a mountain of cash. So a bunch of us encouraged Joe to set up a crowd-funding site to help raise money to save Sally. And we’ve all pitched in. And I am hoping you will consider helping out too. Even five bucks x enough people = giving Sally a chance.

(Please see the link below.)

This is what barn raising looks like in the 21st century. This is what passing the hat looks like in the digital age. For a humbly employed NPR radio producer/musician (Joe A.) and his best friend (Sally), this is what community looks like. And for me personally, being witness to Joe & Sally’s friendship over the last decade has helped me understand better how deeply enriched our lives are by our relationship with our non-human companions.


PS. - Brother Sun released our long-promised 2nd record, Some Part of The Truth, and it has received great critical acclaim. Indeed, the record rose nearly immediately to #1 on the Folk DJ Chart here in the States, as well as getting a good dose of airplay in Canada. The CD also garnered the #1 song for the month of March – Lady of The Harbor (written by yours truly). And, our good friend Neale Eckstein just put together a GORGEOUS video for the song. It's up on YouTube. Check it out (Link below).

In Addition, I will be doing a few rare solo shows this summer in Hobart & Carmel, IN (June 8th & 9th) as well as my solo debut at the legendary folk concert hall - The Ark, in Ann Arbor, MI (July 7th)!