Veteran's Day - What It Means To Me 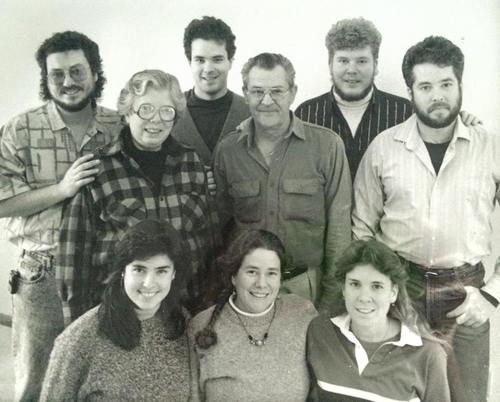 My dad used to grumble on Veteran’s Day as he grabbed his Thermos and lunch on the way out the door to work, “Everyone gets Veteran’s Day off but the Veterans!”

I didn’t know what he meant. I didn’t know what he had seen, what he had sacrificed, what he had lost and gained during the years he served. (1948-1952). He did not talk about it much. The occasional story, sure. But it was a piece of his life he tried to leave behind when he got married, and then had seven children. And when he died in 1991 at age 62, the Army put a footstone marker on his grave that read simply, “Edward Louis Jencks, U.S.A. Master Sergeant, Korea.”

It was such a small part of his life chronologically, but there it was, written in stone. And for a long time it was the only marker present, the only memorial, until the family put up a headstone that more fully reflected his life and family in the civilian world. It is my belief that part of why he died at age 62, was survivor’s guilt. He carried with him a deep need to live the most ethical, most decent life he could possibly live, in honor of the hundreds and hundreds of men he trained and knew, who did not return from that war alive.

In 2013, 22 years after his death, my friend Paula Griffin, approached me at the Old Songs festival and asked me if I would consider doing some songwriting with Veterans. I said, “Sure! I’ll give it a try.” And what a life-changing process it has become. For three years now I have been the songwriter in residence for “Warriors Heart To Art.” WH2A is a retreat in Spokane, WA for Veterans of the armed services who are in one form or another dealing with Post Traumatic Stress.

He said, “I don’t use the D in PTSD. It stands for Disorder. Pathology. What I am experiencing is not a disorder. It is not mental or emotional pathology. It is my humanity reasserting itself. It is a sign of my true humanity, reemerging and wrestling with the unconscionable things I was asked to do in the name of my country. I don’t use the D.”

He taught me a great deal, as has every Vet who’s attended one of these retreats. In sharing their stories, women and men of several generations have helped me understand the impact of war, violence, sexual assault and trauma, on the human psyche, as well as the indefatigable spirit that ever still reaches for redemption and meaning.

They have also helped me understand the pride, loyalty, sense of honor, duty and patriotism that blends together with the darker experiences – into a turbulent conglomeration of thoughts, emotions, and contradictions that are hard to reconcile. Blessedly, we are all greater than the sum of our contradictions!

On this Veteran’s Day, I offer my gratitude to the Veterans at Warriors Heart To Art, and everywhere. The sacrifices you and your families have made in service to the constitution, your people, and the ideals of democracy and freedom are noteworthy and recognized with gratitude. Your voices are heard, and your dedication is honored.

One of the Vet’s on this year’s retreat wore a T-shirt that said, “A Veteran is a person, who at some point in their life wrote a blank check to the United States of America, payable for a sum up to and including their own life.”

As a nation, we may not always agree on how to solve our problems, or even what those problems are. But you, our service women and men, step up no matter who’s in charge. You stand up and give your best. And I thank you.

Please watch the video/ slide show linked here. This is the first song I wrote with Veterans in 2014. Thanks to Warriors Heart To Art for creating a space for healing, and to the Vets who courageously share their stories.

You are remembered on this Veteran’s Day. And you are not alone.