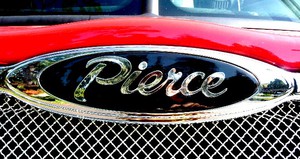 My father, Edward Louis Jencks (1928-1991), died suddenly at age 62 from a heart attack. I was 19 at the time and present with him at his passing. For a portion of my late teens and on into my 20s, I felt a little bitter on his behalf about the cruel trick fate had dealt him. To leave so young, to have never done or seen so many of the things he wanted to do and see; it seemed unfair. He spent a lifetime working for "the man," even fought in a war for "the man," and got an early grave for his troubles. (So the storyline went in my head). I never saw his work as overly significant, just another cog in a big machine.

But one night during my junior year in college, I was staying over at my girlfriend's place. At about 2:00 AM, there was a fire alarm in the building. We roused ourselves put on robes, and left the apartment complex. As we sat on the curb with neighbors, we were a little scared and worried. As the fire trucks approached, we realized it was a bigger deal than we had initially thought, because several engines were arriving and the smoke from the back of the building was becoming thicker and more pungent.

At one point in the chaos, I looked over and saw a new Pierce brand fire truck. And I began to cry. The last three or four years of my Dad's life, he designed mounting brackets for Barber Coleman governors on Pierce Fire Trucks. The governor controlled engine speeds while the truck was working, so that ladders, pumps, electrical generators and air compressors for pneumatic tools would all work when needed.

As I looked at the Pierce logo on the front of the fire truck, for the first time in my life I felt deep, deep pride in my father’s work. It no longer seemed irrelevant. It seemed vital, lifesaving, and deeply important.

How many fire trucks were/are out there with Dad's hardware in them? How many hospitals and schools and ships at sea, police and fire stations, mine-safety equipment, disaster relief workers and emergency power supplies rely on my father’s work, in order to function in a time of need?

There's no way to know. But I was deeply grateful for the chance to have my mind changed about the relevance of Dad's professional life and work. Even if the realization was posthumous, it was a fabulous and necessary re-set button on my perspective. It is always good to see a bigger picture.