With Hope for a Season of Peace 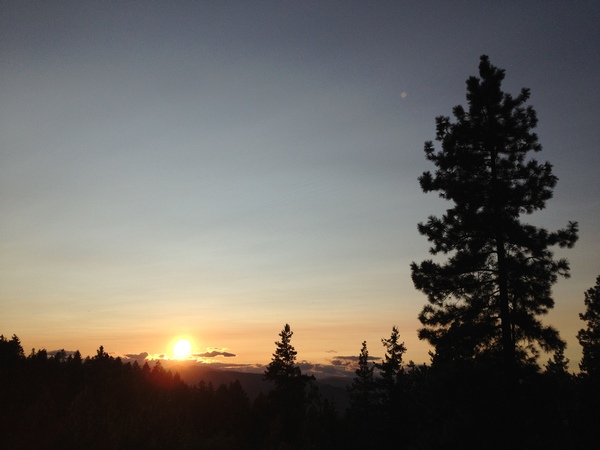 Sunset over the Cascade Mountains - taken from Badger Mountain. JJ

or for Firefox users: https://www.paypal.me/JoeJencksMusic

Never has an asterisk seemed to say so much. And yet it does. This is a year like no other that most of us have lived through. And I will not try to quantify it for you. You have had your own experience of the era, and you travel with the zeitgeist in your own way. For many of us it will forever be remembered in the context of loss. But it is also a year that has encompassed sadness, hidden joys, strife, change, adaptation, discovery, fear, learning, resignation, anger, perseverance, tenacity, worry, hope, relief, victory, defeat, growth, evolution, innovation, and still, loss. My heart is with you, as we share in this journey.

As this year winds down, I offer two more broadcast perfomances. Music heals many things. As Kate Wolf said - Love can't give you everything, but it gives you what you need. I also feel that way about music. It gives me what I need, it helps me heal what needs healing. And it helps me remember to love, to the best of my ability. I sing my love into the world, along with my compassion, and hope for a better future we will build together, as best we can.

Saturday December 19th - On A Midwinter's Night - Joe Jencks Holiday Concert Broadcast
9:00 PM ET / 8:00 PM CT / 7:00 PM Mountain / 6:00 PM Pacific
Imagine if Burl Ives, Holly Near, and Howard Zinn got together to plan out a holiday playlist...
Tune in for stories of hope across a few centirues, new and timeless music, and an evening of connection and community.
YouTube Live Link: https://youtu.be/MARC-wzdPjE

As has become my tradition in these times, these concerts are offered absolutely for free. Your donations are welcome and appreciated. But there is no ticket price. I give the music freely, as it is what I have to give. Please listen, share with friends, family, and community. Make comments in the chat-bar, and know that however distanced, we are still in community with each other. And for that, I am immensely grateful.

Please also see below an essay I wrote about the story behind one of my favorite Christmas songs, Silent Night.

May peace and hope be your companions through the long nights of the season, and may unexpected joys and light find their way to you.

With Hope for a Season of Peace ~ Silent Night

As we approach the holidays, we become slowly inundated with “Christmas” music. Some of it is beautiful and heartfelt. Some of it is terrible, cliché, or robustly innocuous - as if someone had to work really hard to make something that overtly bland. And in fact, they did. Some of it is just about making money for someone, and some of it is so well worn it no longer holds meaning. But then there are those special holiday songs, the ones that get us every time. The songs that are so profound that the song will outdistance the singer every time, no matter how good or bad the delivery is. For me, Silent Night is just such a song.

Written two-hundred and two years ago this Christmas, Silent Night remains a magical piece of music, even for those who do not ascribe any particular meaning to its theological roots. One that invites people’s hearts to open, because of its unadulterated and gentle beauty.

Franz Xaver Gruber took words written by Fr. Joseph Mohr, and penned one of the most beautiful melodies that has emerged in western musical traditions. Gruber was an organist by training, and a music teacher in a town near to where Fr. Mohr was serving at St. Nicholas in Oberndorf bei Salzburg, Austria. The church organ had been damaged by flooding, and Fr. Mohr was eager to have new music for his Christmas Eve Mass. (He was serving St. Nicholas parish after all!) So Mohr took a poem he’d written a few years earlier and brought it to Gruber, asking him to write a Christmas hymn for voice and guitar. Gruber took up the challenge with enthusiasm. From that point forward, the song travelled across Europe and Russia, to the Americas, and by the mid 1840s was known in countless places around the world.

A poet writes words and then seeks to put them to music. A composer almost always starts with a melodic idea and carries that forward to its fullest measure, as an expression of emotion and idea unto itself. In the case of Silent Night, Franz Gruber wrote an inspired melody. And indeed, some of the cadence was dictated by the words. Of course it would be in six-eight time. The poetry in German leans that way already.

But without the melody and chord changes Gruber wrote, Fr. Mohr’s words would not have travelled across the world in just a couple decades, in an era even before the telegraph. But Gruber would not have written that precise melody without the cadence and content of the words inspiring its general flow. It was the pairing of music and word that made it truly inspirational. And of course it was meant as a lullaby. It was a song, sung though time to a baby in a manger, a fatigued and likely frightened new mother, and father who was overwhelmed. Mohr, dipping deeply into his faith, wrote words that were both of praise and tenderness. And Gruber, understanding this sentiment, took up the challenge of musically cradling the words of a devout mystical poet, with the same tender care one would hold such a newborn baby.

It is this tenderness that makes Silent Night durable across time and culture. I have Jewish, Hindu, Buddhist, and Muslim friends who say that this is the best Christmas song ever written. It is because it reaches across the divide of theology, and reaches into a quintessential human experience: Birth. Joseph Campbell, famed professor of global mythology would say that this song speaks to the “Mono-Myth.” It is part of a deep human archetypal understanding that transcends culture, time, and place. There is universality to the narrative, and in the tenderness it evokes.

There is not a songwriter or composer alive, who does not hope to pen at least one piece like this in their lifetime. Even one piece of music that outlives a composer by a few centuries, is a gift for that musician, and for the rest of us. And it is in that spirit that I am very careful as a songwriter and composer, and equally careful as a song interpreter. I will inevitably put a little spin on any song I sing. I may elaborate ever so slightly on a melody, or play with the rhythm just a touch for emphasis. This is to be expected. But if I am singing a song written by another writer, it is because it moves my soul. And it is precisely how they wrote it, the tension and juxtaposition of melody, verse, and chord changes that draw me in. I am unlikely to change that very much. To do so is to alter what drew me to that specific piece of music in the first place.

I wholeheartedly endorse experimenting with songs. Especially the ones that have become chestnuts... The songs that once had something to say, but are now lost in layers of interpretation and cliché. But a good song, it will keep speaking its truth centuries later. Who am I to tinker with that truth?

There is nuance and wonder on the journey of musical discovery. I set Silent Night to an Electric Bouzouki accompaniment, and I even bring a little digital delay and fuzzy overdrive in for dramatic moments, much the way an organist like Franz Gruber would have used various “stops” on his organ. Gruber was playing in his time, the most technologically advanced mechanical musical instrument that had ever been created. But when it broke, he went to a simple guitar, a brilliant melody, and a gentle six-eight lilting waltz. I have to believe that if he had access to a pedal-board with some bells and whistles (a phrase we get from pipe organs by the way, which do in fact have bells and whistles), Gruber would have employed my pedal board artfully. But he would have written the same kind of melody. Even with modern instruments, that set of words would almost surely have led Gruber to the same emotive place of gentleness, tenderness, awe, and wonder.

I’m not at all sure that people will be singing much of the late 20th Century pop-Christmas music in 200 years. But I bet on its 400th anniversary, Silent Night will be just as powerful and tender as it was on candle-lit Christmas Eve in 1818, in a small town in Austria. Or as sung by soldiers in the trenches of WWI during the Christmas Truce of 1914 (Joyeux Noël). A song that can stop a world war, even for a day, is a song that should be revered and respected, just as it is.

Wishing you all Peaceful Holidays!